What a day I had Wednesday! And Monday and Tuesday! Someone should have told me it would be so much fun turning 49.

Monday night was our dinner at Benihana. I had a birthday coupon which they gladly honored and it fully covered my filet mignon and scallops. Yes! I am always amazed at how good the fare is when cooked fresh and simply.

Then Tuesday night all the family was home for carnitas and birthday cake and presents and Apples to Apples and I was worn out celebrating by 9:00.

And Wednesday morning, the actual birthday, I walked into the band room to find this: 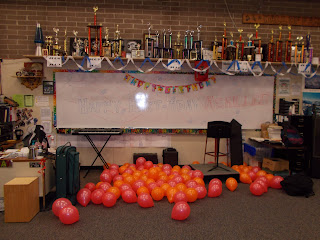 The students who stayed late on Tuesday decorated with streamers and banners and writing all over the marker board and balloons on the floor. There was so much stuff floating around, it set off the alarm when the heater came on and and the breeze put it all in motion (I found this out later from the custodian). All day long my students celebrated by singing to me and congratulating me and posting all over my Facebook page.

When I travelled over to Bear River to work with a class of fourth grader (Mrs. Selken's class) they greeted me with a specially written Happy Birthday song and a whole stack of birthday cards.  Here are some quotes:

"I hope you have a wonderfull birthday you do somuch things for us and thankyou you are the best Music teacher e v e r  s o  h a v e  a n AWESOME birtday!"

"Dear Mr. Achilles, I like you as my music teacher I like your music it is nice it sounds nice."

"You have been the best music theacher ever. you tought me many things. you are off the wall!"

"Happy Birthday! Your an awesome music teacher :) Your a good music teacher. Your very funny. You always make me laugh. Its funny when you make funny faces  :P  have a awesome day mr. Achillies!"

"Happy B-day. I hope you had a good one and thank you for teaching me music. I have a lot of fun in your class and I have a question. How old are you turning? You could tell me at class. By the way, im Kaycie, female, your student."

Well Kaycie, I'm 49, but thanks to you and your class I feel like I'm a very happy 49, and all your notes and well-wishes truly warmed my heart.

To be honest, this is the first birthday in years I felt like celebrating. God has been so good to me to surround me with people who care for me and love me and accept me. I am most blessed.

Word pt. 2: Breathe on Me Breath of God

Following the Sandy Hook shootings, I was mesmerized by the media's response. For days, the events were reviewed and discussed and bemoaned; it was as if the entire nation had taken a moral punch to the gut that left us dazed and out of breath. The question “How could this happen?” was asked in so many times and ways it clearly revealed an amazing depth to our corporate cluelessness.

As I listened to the radio and watched the news, I wondered how well God would be welcomed to come and speak to the issue. Would CNN give Him the mic, or Fox News break with all other programs to cover a press conference with God? And how diligently would His every word be analyzed? What if the One who knew all things from all perspectives with all wisdom spoke to us in our time of need?

But that's just it: He HAS spoken to us. Highest on the list of the Bible's self-claims is this one:

The words in the Word flowed out from God who specifically chose them—or better yet, created them—to express truth with certainty and clarity. God spoke them. That's the claim: “Thus saith the Lord!” and thus in actual print we see the actual words with actual meanings given to specific people in particular contexts that can be clearly know.

Think about it: we have in our possession the very thoughts of God—His specific words. We know what He thinks. We have it in print.

Would that we apply the same analysis to His words that we might apply to a speech by the president or the head of the Federal Reserve. In that context, we would pay attention to every nuance. Don't the words of God deserve that same kind of careful concern, especially in light of specific events that call for His wisdom?

And shouldn't the church live to unabashedly declare both the words and their ramifications for our world? We have become too apologetic. We hold in our hands the very words of God.

Two articles appeared last week on my Google news feed—one right on top of the other. The first explained the fracas surrounding the benediction at Obama's coming re-inauguration. The inaugural committee had invited Louie Giglio to pray at the event. Louie is a mega-church pastor from Atlanta who has become known for his efforts to end human trafficking. However, someone “discovered” that Pastor Giglio had preached a message in the 1990's affirming the classic protestant teaching about homosexuality. Word got out and he was disinvited from the inauguration. Or he withdrew. It's not clear to me who acted first. The blogs are aflame with comments about this situation.

The second article—I kid you not—was about the Bible on which Obama will lay his hand as he renews the oath of office. It was passed down through his family and has some significant sentimental value to the president.

What a strange juxtaposition of print. The Bible affirmed. The Bible denied. Swear by it, but don't tolerate a man who genuinely believes it.

But it makes a point about the condition of our society...or at least that of our leaders and the ruling parties. For them—for many—the Bible is nothing more than a sentimental symbol. It functions well for swearing-in ceremonies. But not as a legitimate authority for life. It's appropriate for a human pledge, but not as a rule or standard by which to live. Its verses are used randomly and out of context to support agendas of all kinds. The actual meaning of the words has been trashed in favor of experience and sentiment, and the ever-popular “what does this mean to you” method of interpretation.

I had the privilege last Saturday of speaking for a disability ministry training event. One of my seminars was entitled “Maximizing the Word: How To Create an Environment Where God's Word Speaks to All.” It was a joy to review with the folks in attendance what the Bible says about itself, and answer common questions about the clarity of the Scriptures, and relevance, and power.

I will post some of my notes here over the next few days. It will be good to recall the clear ramifications of the Bible's self-claims. To me, it is not a symbol, but a life-giving tool, a gift from God, error-free and waiting to be grasped and read and welcomed.

Last Sunday (December 30, 2012) I had the privilege of filling in for our vacationing pastor. Here's the link for the message...

Sermon Audio at Providence Bible Church in Rocklin
Posted by JR Achilles at 9:16 PM No comments:

I just discovered that my Performance Bio is still up on the Yuba Sutter Arts Council Web Page. I'm one of their "Artists." Cool! Access is here.
Posted by JR Achilles at 9:05 AM No comments:

Quote of the Day from Stephen Charnock

"A Secret atheism, or a partial atheism, is the spring of all the wicked practices in the world; the disorders of life spring from the ill dispositions of the heart."
Posted by JR Achilles at 8:50 AM No comments: